Screen reader users, turn on the “expand abbreviations” configuration setting in your Screen Reader to hear entire words instead of abbreviations. A tsunami (Japanese for "harbour wave") is series of huge ocean waves caused by a rapid, large-scale disturbance of the sea water. Tsunamis can be caused by submarine volcanic eruptions, submarine landslides, meteor impact, and major earthquakes occuring beneath the seabed causing large vertical movements. In deep water, tsunami waves are less than a metre high, but they can travel at speeds exceeding 800 kilometres per hour and can easily cross an entire ocean basin. When they reach shallow water or narrow inlets the waves slow down and the height can build into a wall of water which causes devastation on the shore.
On January 26, 1700 one of the world's largest earthquakes occurred along the west coast of North America and created a tsunami which completely destroyed the winter village of the Pachena Bay people with no survivors. These events are recorded in the oral traditions of the First Nations people on Vancouver Island. There is evidence of repeated tsunamis inundating our west coast following giant megathrust earthquakes in the Cascadia seismic zone.
In the twentieth century, 27 people were killed on November 18, 1929 in the tsunami that struck the Burin Peninsula of Newfoundland. This tsunami was caused by a large submarine slump along the continental slope triggered by the magnitude 7.2 earthquake that struck approximately 250 km to the south along the edge of the Laurentian Slope.
QUICK TIPS - If you live or find yourself by the ocean
West Coast and Alaska Tsunami Warning Centre (WCATWC) Message Definitions
Data from selected NRCan seismometers are forwarded to the National (United States) Oceanic and Atmospheric Administration’s (NOAA) West Coast and Alaska Tsunami Warning Centre (WCATWC) in Palmer, Alaska. This information is integrated with other seismic, tide gauge, and deep ocean buoy system data to produce tsunami information statements, alerts, watches, or warnings for all North American coastlines (including the Atlantic and Arctic). WCATWC distributes these messages to Emergency Measures Organizations (EMO) and other clients 5 to 15 minutes after a potentially tsunamigenic earthquake has occurred and provide updates at regular intervals.
WCATWC product definitions changed to the definitions provided below on February 12, 2008. The products issued by the center are warning, watch, advisory, and information statements. Each has a distinct meaning relating to local emergency response. In summary:
Tsunami Warning - a tsunami warning is issued when a potential tsunami with significant widespread inundation is imminent or expected. Warnings alert the public that widespread, dangerous coastal flooding accompanied by powerful currents is possible and may continue for several hours after arrival of the initial wave. Warnings also alert emergency management officials to take action for the entire tsunami hazard zone. Appropriate actions to be taken by local officials may include the evacuation of low-lying coastal areas, and the repositioning of ships to deep waters when there is time to safely do so. Warnings may be updated, adjusted geographically, downgraded, or canceled. To provide the earliest possible alert, initial warnings are normally based only on seismic information.
Tsunami Watch - a tsunami watch is issued to alert emergency management officials and the public of an event which may later impact the watch area. The watch area may be upgraded to a warning or advisory - or canceled - based on updated information and analysis. Therefore, emergency management officials and the public should prepare to take action. Watches are normally issued based on seismic information without confirmation that a destructive tsunami is underway.
Tsunami Advisory - a tsunami advisory is issued due to the threat of a potential tsunami which may produce strong currents or waves dangerous to those in or near the water. Coastal regions historically prone to damage due to strong currents induced by tsunamis are at the greatest risk. The threat may continue for several hours after the arrival of the initial wave, but significant widespread inundation is not expected for areas under an advisory. Appropriate actions to be taken by local officials may include closing beaches, evacuating harbors and marinas, and the repositioning of ships to deep waters when there is time to safely do so. Advisories are normally updated to continue the advisory, expand/contract affected areas, upgrade to a warning, or cancel the advisory.
Tsunami Information Statement - a tsunami information statement is issued to inform emergency management officials and the public that an earthquake has occurred, or that a tsunami warning, watch or advisory has been issued for another section of the ocean. In most cases, information statements are issued to indicate there is no threat of a destructive tsunami and to prevent unnecessary evacuations as the earthquake may have been felt in coastal areas. An information statement may, in appropriate situations, caution about the possibility of destructive local tsunamis. Information statements may be re-issued with additional information, though normally these messages are not updated. However, a watch, advisory or warning may be issued for the area, if necessary, after analysis and/or updated information becomes available.

Japan was hit by a 9.0 magnitude earthquake on March 11, 2011, that triggered a deadly 23-foot tsunami in the country's north. The giant waves deluged cities and rural areas alike, sweeping away cars, homes, buildings, a train, and boats, leaving a path of death and devastation in its wake. Video footage showed cars racing away from surging waves. The earthquake—the largest in Japan's history—struck about 230 miles northeast of Tokyo. The Pacific Tsunami Warning Center issued warnings for Russia, Taiwan, Hawaii, Indonesia, the Marshall Islands, Papua New Guinea, Australia, and the west coasts the U.S., Mexico, Central America, and South America. According to the official toll, the disasters left 15,839 dead, 5,950 injured, and 3,642 missing.

What's more, cooling systems in one of the reactors at the Fukushima Daiichi Nuclear Power Station in the Fukushima prefecture on the east coast of Japan failed shortly after the earthquake, causing a nuclear crisis. This initial reactor failure was followed by an explosion and eventual partial meltdowns in two reactors, then by a fire in another reactor which released radioactivity directly into the atmosphere. The nuclear troubles were not limited to the Daiichi plant; three other nuclear facilities also reported problems. More than 200,000 residents were evacuated from affected areas.
On April 12, Japan raised its assessment of the situation at the Fukushima Daiichi nuclear power plant to Level 7, the worst rating on the international scale, putting the disaster on par with the 1986 Chernobyl explosion. Developed by the International Atomic Energy Agency (IAEA) along with countries who use nuclear energy, the scale defines level 7 as a nuclear accident that involves "widespread health and environmental effects" and the "external release of a significant fraction of the reactor core inventory." Almost two months later, the IAEA called the status of the Fukushima Daiichi nuclear plant "very serious."
At a news conference on March 13, Prime Minister Naoto Kan, who later gave the disaster the name "Great East Japan Earthquake", emphasized the gravity of the situation: "I think that the earthquake, tsunami, and the situation at our nuclear reactors makes up the worst crisis in the 65 years since the war. If the nation works together, we will overcome." The government called in 100,000 troops to aid in the relief effort. The deployment was the largest since World War II.
The tsunami in Japan recalled the 2004 disaster in the Indian Ocean. On Dec. 26, a 9.0 magnitude earthquake—the largest earthquake in 40 years—ruptured in the Indian Ocean, off the northwest coast of the Indonesian island of Sumatra. The earthquake stirred up the deadliest tsunami in world history, so powerful that the waves caused loss of life on the coast of Africa and were even detected on the East Coast of the United States. More than 225,000 people died from the disaster, a half a million were injured, and millions were left homeless.
See statistics on Deadliest Tsunamis and Deadliest Earthquakes.


The Science of Tsunami

A tsunami (pronounced soo-NAHM-ee) is a series of huge waves that occur as the result of a violent underwater disturbance, such as an earthquake or volcanic eruption. The waves travel in all directions from the epicenter of the disturbance. The waves may travel in the open sea as fast as 450 miles per hour. As they travel in the open ocean, tsunami waves are generally not particularly large—hence the difficulty in detecting the approach of a tsunami. But as these powerful waves approach shallow waters along the coast, their velocity is slowed and they consequently grow to a great height before smashing into the shore. They can grow as high as 100 feet; the Indian Ocean tsunami generated waves reaching 30 feet.
Tsunami is the Japanese word for "harbor wave." They are sometimes mistakenly referred to as tidal waves, but tsunamis have nothing to do with the tides. Tsunamis have been relatively rare in the Indian Ocean, and are most common in the Pacific Ocean. 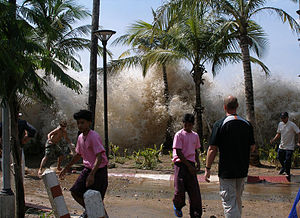 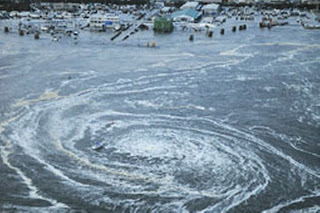 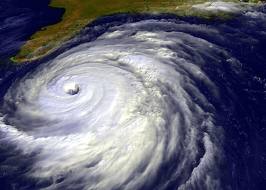 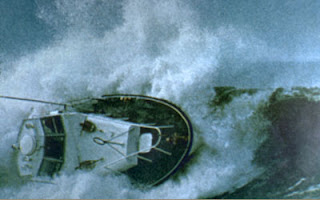 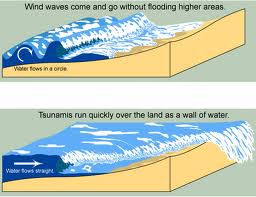 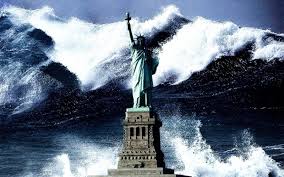 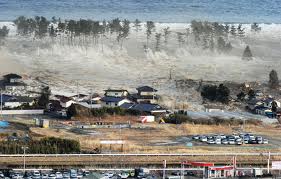